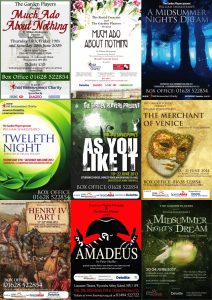 The Garden Players are an amateur acting company formed in late 2008 who perform Shakespeare’s plays in open air garden settings to support selected charities, including Child Bereavement UK and SportsAble. We have also previously supported local Rotary causes and Children with Leukaemia.

The company was initially comprised of experienced performers drawn from local societies within the Thames Valley area. We have an exciting programme of events lined up and would be delighted to hear from anyone interested in joining us either on stage or in a variety of other important areas.

Our inaugural production in June 2009 was Much Ado About Nothing followed by a repeat production on the grand ‘stage’ of the Royal Crescent Gardens in Bath. A return to Beaconsfield in 2011 for a production of A Midsummer Night’s Dream, directed by Louise Tait, was a similar success. All productions have been virtual sell-outs, gratifying to both cast and charity beneficiaries, with our 2012 production of Twelfth Night raising £8,340 for Child Bereavement UK. A further £12,000 from As You Like It brought the total to more than £48,000. To date we have raised just over £100,000, one of our key milestones, since 2005-present.

The open air performances, have been staged in Storrington garden in Ledborough Wood, Beaconsfield, with the specially lit woods behind providing a magical backdrop as well as the wonderful venues of The Royal Crescent, Bath and, from 2013 onwards at Stubbings House near Maidenhead.

The plays, which were sponsored by Deloitte, HSBC, Diageo plc, Landsdowne Conservatories,and Stuart and Trish Fletcher, have been widely supported by local businesses in Beaconsfield, Maidenhead and Bath who donated many excellent and extremely generous raffle prizes which helped significantly with the fundraising total.

Jill Adams, who received the cheques on behalf of Child Bereavement UK, has said: “We are incredibly grateful to The Garden Players for putting on these magnificent productions in aid of the charity and raising so much towards our cause! It just goes to show how important and effective local community fundraising can be in generating much needed funds.”

Ann Chalmers, Chief Executive of CBUK recently wrote “On behalf of Child Bereavement UK and the families we support, I would also like to thank you for the wonderful amount raised, a record! You must be thrilled and feel incredibly proud of such an achievement, and it will make an immense difference to us in helping families rebuild their lives.”